About a Month ago, I shared in a post that I learned a valuable lesson of acceptance from my bulldog who decided to use my journal as a chew toy.  One thing that I didn’t mention in the post was that Oliver passed away the day before I published the post.  I had been working on it for a few days and Oliver’s death was my little tribute to him.

Oliver wasn’t the smartest dog in world.  He was the type of dog that would jump in the lake without hesitation but forget he can’t swim.  He embraced every moment and had fun and was the life of the party.  Sometimes to our dismay but he was always in the moment and it was OK, even if there was a mess to pick up in the end.   And when I or my fiancé’ was down and feeling a little blue, he was the first to come over and put his paw on your lap, look at you and let you know everything is going to be ok; Oliver’s here. 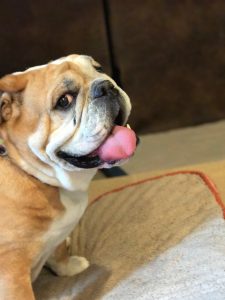 Pets are amazing because they do exemplify unconditional love perfectly.  No matter how hard we are on them or how much we might ignore then throughout the day, there are there for you ready to play or whatever.  Oliver was no exception.  He got in tUnrouble and got yelled at many times because of his impetuousness, strong will and impulse control. (all traits of an English Bulldog FYI)   He wanted to be in the middle of everything which sometimes aggravated the heck out of us but he never stopped being himself.  His own authentic self.   Isn’t that what we all want at the end of the day?  To be our own authentic self?

So thanks Oliver for being in my life and showing me how fun it can be to just be yourself.  I strive every day to be more “Oliver like.”   Well… except for the farting and the snoring.

← Allow and free yourself
Family and the Olympics and Grateful →